May 13rd, 2019, Mr. Truong Quang Hoai Nam – Vice Chairman of Can Tho People’s Committee and heads of departments welcomed Mr. Kyle Nuas – Consul General of Canada in Ho Chi Minh City, who was the head of the delegation to visit and work with Can Tho City People’s Committee. 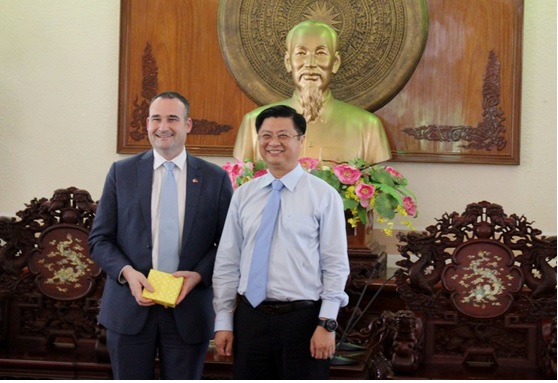 At the meeting, Mr. Truong Quang Hoai Nam welcomed the delegation of the Consulate General of Canada in Ho Chi Minh City, who said that Can Tho City is constantly striving to expand cooperation with partners inside and outside country, in which Cannada are considered as one of the important partners, he expressed the hope between Canada and Can Tho City will strengthen coordination of implementation of investment promotion programs, support businesses such as teams seminars, fairs, exhibitions, exchanges… In order to create conditions for investors of both sides to better understand the investment environment, policies to attract and potential investment of each party.

Mr. Kyle Nuas – Consul General of Canada in Ho Chi Minh City thanked the enthusiastic welcome of the city leaders and he promised to be a bridge to promote development cooperation between Can Tho and Canada to maximize the potential and strengths.

Linking, clearing resources to complete the logistics service chain for agricultural products in the...

Nam Can Tho University wants to build university-urban complex