On March 27, 2019, Mr. Vo Thanh Thong – Chairman of Can Tho City People’s Committee, chaired the meeting to review the Japanese mission and deploy the plan for the investment promotion in Japan. At the meeting, in attending the meeting were Mr. Pham Thanh Van, Former Deputy Secretary of the Party Committee, Chairman of the Honorary Committee of Vietnam – Japan Friendship Association of Can Tho City and representatives of heads of departments and reporters.

At the meeting, Director of Can Tho Promotion Agency – Mr. Nguyen Khanh Tung reported the results after the trip to Japan. During the four working days from 12 to 16 March 2019, 16 meetings were held, including four highlights:

– First, all proposals from Can Tho were approved by the Governor of Wakayama Prefecture; prioritize the memoranda that Wakayama Prefecture signed with Can Tho City; at the end of November 2019, he will visit Can Tho city on the occasion of the Vietnam – Japan Cultural and Trade Exchange Program; cooperating with Wakayama province on high-tech agriculture and processing.

– Secondly, Can Tho City is developing a cooperation strategy for Can Tho – Japan from now until 2025 and choosing Kansai as a key area.

– Thirdly, strengthen the relationship between enterprises of Can Tho city and Sakai city for investment research and trade cooperation, especially in the field of seafood processing agriculture and seeking partners to establish Japan – Vietnam General Clinic in Can Tho city to treat human diseases foreign, Vietnamese people have demand.

– Fourthly, working with Kobe Computer Institute, Can Tho City wants to develop rapidly the fields of agriculture, industry, commerce, smart city, etc. Through exchanging academia will develop a plan to concretize the cooperation between the two parties.

In addition, Can Tho city also worked with Okayama Academy of Foreign Languages in Japan to promote investment and cooperation in Japan, met and discussed with Japan Meai and Japan’s Fellow International. Worked with Kobe City Government on wastewater treatment and infrastructure, invited Kobe City Government to organize a delegation to visit Can Tho.  In the trip, Can tho delegation also worked with Kobelco Eco-solutions (KES) Co., Ltd and JICA Kansai, greeted the Deputy Governor of Hyogo Prefecture, JTB Travel Company, Mr. Yasushi Tanaka, JICA Senior Vice President, the Vietnamese Embassy in Japan, organized Investment Promotion Conference and Trade Connection, opened Can Tho Desk office in Tokyo.

At the end of the trip, the delegation signed 02 MOUs with Kobe Computer Institute and Okayama Foreign Language Institute, opening a deeper cooperation in the future with Japan. 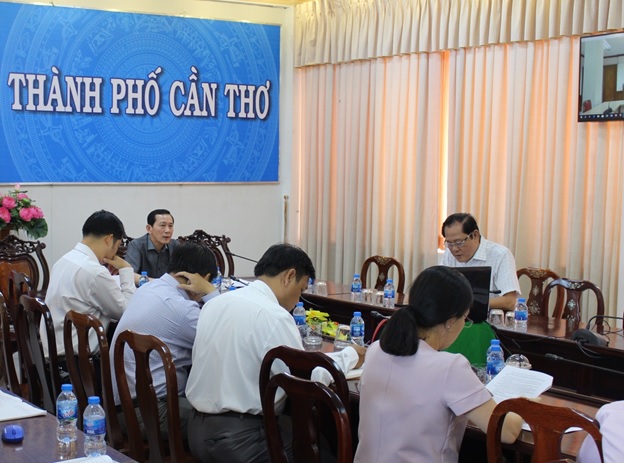 Seminar “Which market for folk cakes?”

Expected Center to link production, processing and consumption of agricultural products in the Mekong...