Home Local News The Ambassador Extraordinary and Plenipotentiary of the Republic of Cuba in Viet... 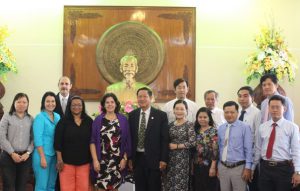 During the meeting, Mr. Le Van Tam appreciated the friendship, traditional relationship and development cooperation between Viet Nam and Cuba in the past years.

Mr. Le Van Tam introduced the potentials, strengths and development orientations of Can Tho city in the future and wishes to continue promoting cooperation with Cuba in all fields. Ambassador of the Republic of Cuba in Vietnam thanked the Can Tho city government for their support to Cuban businesses to work effectively and said that Cuba is currently studying the innovation experience of Vietnam to implement in Cuba’s socio-economic development. Through this, she expressed the desire to continue maintaining and expanding trading activities and promoting cooperation with Can Tho City in all areas, especially in the field of health and biotechnology.

Ms Lianys Torres Rivera said that the presence of Cuban enterprises in Can Tho such as LABIOFAM Vietnam Limited Company in Tra Noc Industrial Zone, Binh Thuy District over the past several years was one of the concrete manifestations of long-term cooperation between Cuba and Viet Nam. With a particularly good relationship, Ms. Lianys Torres Rivera believes that in the coming time, cooperation between the two countries, including TP. Can Tho and the localities of Cuba will not stop growing.

Promoting cooperation relationship between Can Tho city and Korean partners